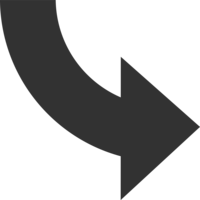 There are many ways to support streamers you enjoy watching and donating bits is among the most popular. Think of bits as Twitch currency that viewers can buy for about $15 CAN per 1000 bits. Viewers can buy these bits and use them to "cheer" in the chat which is essentially just an upgraded message with a small animation showing the bits you donated and the message you added. Streamers will usually read these messages out loud depending on their size, and you will get a badge next to your name when chatting after spending certain amounts of bits as shown here. (Grey Triangle, more on badges at end of page)

When you actually subscribe for 5$/month, the streamer will usually have your subscription appear briefly on the broadcast, sometimes with a message you can add, and depending on the size of the streamer, they may say thanks or respond to your message out loud to the stream.

You can also get different kinds of badges for things like subscribing with Twitch Prime (Prime = 1 Free Sub per month if you have amazon prime, shown as blue crown badge), reaching the weekly top three cheerers (Also shown at the top of the chat), being a chat moderator, taking the GLHF pledge, being VIP, and much more but additional details on these later. You will even get a badge just for subscribing, although each channel's badges will be different and chosen by the streamer. In most cases, the sub badges will be different depending on how many months you have been subscribed in a row as shown here again.  (Turquoise symbol)

For Subscriber-Only chat, only viewers who have paid the 5$/month subscription for the current month will have unlocked the ability to chat in this mode. Different types of games will cause streamers to use Sub-Only mode in different ways but traditionally it is used when chat gets too out of hand with new viewers and non-subs (sometimes referred to as "plebs" or "stream hoppers") taking over, sometimes with aggressive or toxic chatting. For smaller streamers, whose chats move much slower, this mode is not as necessary as a small amount of moderation usually can filter out the chatters making the experience worse, but for large streamers it can be very useful in certain situations.

Emote-Only chat, again, is exactly how it sounds - a chat mode where no text can be typed and only emotes are allowed to be used. (Except for moderators, the streamer, VIPs, bots, etc.) This is traditionally used in a similar way to Sub-Only, in an effort to handle when chat gets out of hand (harassment, toxicity etc.), except it completely removes the ability to type messages. Many times the chat will end up communicating what they want to say anyways through the creative use of emotes but this mode will help deal with floods of individual  "trolls" (Anonymous chatters who purposely say controversial, rude or inappropriate things in chat in the attempt to gain attention from the streamer or viewers). There are several other ways that streamers use emote only mode, some being to avoid spoilers for games or TV shows, and in certain games or categories like GTA RP - to avoid meta. (This is a different meta than referred to earlier. This meta happens when a viewer tells the streamer information they should not know that will affect the outcome of the game or event unfairly.)

Follower-Only chat is the last of the main three modes and probably the one you will run into the least often. This is mainly due to the ability of the two other chat modes being able to solve a majority of problems that can come from a larger chat getting out of hand. When Follower-Only mode is most useful is in time where the streamer does not want to cut off all the viewers who have been following for a long time and supporting the stream but are unable to pay the $5/month subscriber fee. This subscriber only mode can create exclusion for these chatters who can't afford to subscribe but still want to participate in chat, and depending on the streamer, the category and the state of chat, some streamers will use follower-only instead of sub-only mode to help deal with this.

The different modes of Twitch chat are relatively self-explanatory based on their name but when and why these modes are used may be unclear to new users. The following three chat modes are by far the most used and the ones new viewers will run into the most 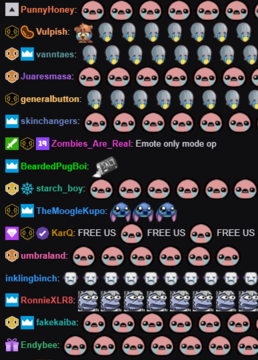 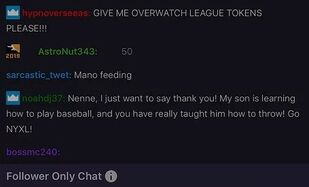 More on Bits, Badges, Subs and other Features.....

Another way of showing support to a streamer you enjoy is by donating bits or gifting subscribers.  When gifting subs you can chose how many subscriptions you want to buy and then hand those out to other viewers in the chat, and based on how many you purchase, you will get a corresponding chat badge as shown below. A lot of the times subs are gifted completely randomly so if you happen to get one, you will have all the benefits of being a subscriber for a full month until it expires and if you are the one giving them, you will get a present as a badge beside your name in chat with the color depending on how many you gifted. When subscribing, your choices will come in three Tiers depending on how much you want to spend. ($5/month, $10/month, $25/month) Click the button below to see all the different types of chat badges. 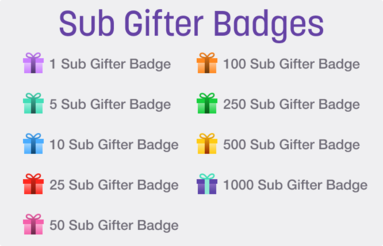